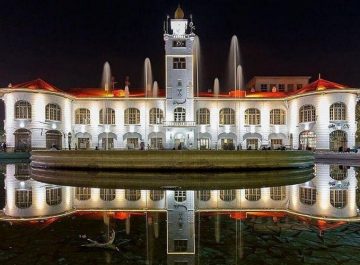 Located in the center of the plateau of Gilan, Rasht is 323 kilometers distance from Tehran. It has a mild humid climate. Dating back to the pre-Islamic period, this city has been an important center for trade and agricultural activities. While these continue to be of high importance in the economy of Rasht, the development of industries has changed it into a semi industrial city. Utilitarian and decorative articles in wood and crochet produced in Rasht have nation-wide fame. The famous visits in this City, park of Quds, Safi mosque, Haj Mohammad Khan mosque, the mausoleum of Imam Zadeh Hassan. GILAN PROVINCE It lies along the Caspian Sea, in Iran‟s region 3 west of the province of Mazandaran, east of the province of Ardabil, and north of the provinces of Zanjan and Qazvin . It also borders the republic of Azerbaijan in the north, as well as Russia across the Caspian Sea. The northern part of the province is part of territory of South (Iranian) Talysh . At the center of the province is the main city of Rasht. Other towns in the province include Astara , Astaneh, Fuman, Lahijan, Langrud, Masouleh, Manjil, Rudbar, Roudsar, Shaft,Talesh, and Soumahe Sara. The main harbor port is Bandar-e Anzali (previously Bandar-e Pahlavi). Enjoying splendid natural beauty, a pleasant climate, lofty mountains covered with lush vegetation and luxuriant forests, this province attracts a large number of visitors each year. Situated to the south of the Caspian Sea (the largest landlocked body of water in the world), Gilan covers an area of 14709 sq km. This province is bounded on the north by the Caspian Sea, on the west by Ardabil, on the east by Mazandaran and on the south by Zanjan. The high Alborz Mountains, sealing off the narrow Caspian strip, trap humidity and create a mild humid region with luxuriant forests and swamps. Being the most humid region in Iran, the annual precipitation is about 200 cm. The following are Gilan‟s chains of mountains: the western mountains which include Talesh and Masooleh 36 Mountains and the eastern mountains including part of the Alborz. The rivers are numerous, most of which originate in the Alborz mountains. But the Sefid Rood, the largest river in Gilan, originate in the interior plateau of Iran, Caspian Sea . Other important rivers are the Pol Rood and the Sha Iman Rood. Along the coast of the Caspian Sea there are many swamps, the largest of which are the swamps of Anzali and Kelayeh. Anzali swamp is in the south of the port of Anzali and comprises the two protected areas of Siyah Kesheem and Seike. covering an area of 450 sq kms this swamp is a place for the oviposition of the fishes of the Caspian Sea. Moreover, it is the habitat of some species of migratory birds, because of which this swamp is of international importance. The swamp supports a natural vegetation which is unique in its kind. There are recreational facilities for boating on the swamp. Amir Kelayeh swamp, which covers 4 sq kms, is located to the south-east of Lahijan city. It is the habitat of many aquatic plants and migratory birds. The slopes of the northern mountains covered with thick forests of oaks, beeches, elm, alder trees and olives. In the plains and in some mountainous areas there meadows and rich pastures. The people who inhabit Gilan province are called Gilak, speaking language the pronunciation of Gilaki. The Talesh ethnic groups, speaking the Taleshi language live in the western Gilan. This group had a nomadic life in the past. Today, however, they have fixed residence. The religion of the Gilak people is Islam.All towns of the province are linked through suitable asphalt roads with each other and with other provinces. The Airport of Rasht city (the Center of this province) is also an important center for transportation. Favorable natural conditions and the dam across the Sefid Rood River, completed in the early 1960s at Manjil, contribute to the development of agriculture. Most of people, therefore, are engaged in agricultural activities. The most important crop is rice, while tea, tobacco, citrus fruits, grain and peanuts are also produced. Gilan‟s industries are mainly centered in the suburbs of Rasht (the capital or province), the most significant of which are food, mining, wood, tobacco, clothing and textile industries. Coal mines, oil and gas are among natural assets. Fishing is of high importance and fish are caught both for domestic consumption and for export More than 100 species of fish are found in the Caspian Sea, the most important of which are bream, whitefish, salmon, mullet, carp, catfish, perch, roach and sturgeon. 37 Having the best quality, the caviar of Iran obtained from sturgeon is an important export.